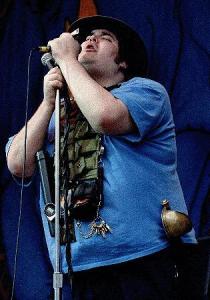 John Popper of Blues Traveler fame was arrested for drving 111 mph (he was the passenger, but it was his car) four rifles, nine handguns and a switchblade knife (found in secret compartments). They also found a Taser and night vision goggles. Popper told officers he collected weapons. Weird.

“Popper indicated to troopers that he had installed these items in his vehicle because (in the event of a natural disaster) he didn’t want to be left behind,” the Patrol said. EXTREMELY WEIRD.

Officers also recovered a small amount of marijuana and a marijuana pipe. The vehicle was seized. Not so weird.

6 thoughts on “Is Popper a Pooper?”