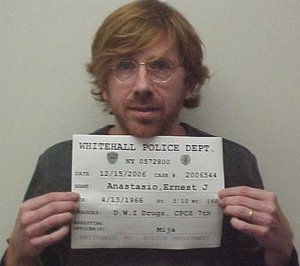 Hippies, Multi-Day Festivals, Dead Heads, Phish Heads, Twirlers, Spinners, and those with incredibly bad hygiene gone from the music scene? Judging by the 35,000 people who attended the Rothbury Festival, jam bands and those who follow them with an undying fervor are alive, well and still selling grilled cheese sandwiches…and were treated to a mini PHISH reunion when Trey, Mike, and Fish all shared the stage during Mike Gordon’s own solo set to do a rendition of The Beatles “Rain”. Hints of a reunion from Trey were rumored to be heard, but dammit NO. NO REUNION TOUR. Don’t get me wrong. I myself was a PHISH head following them around from city to city to see their amazing shows and hear songs from incredible albums such as “Junta”, “Lawn Boy”, “Rift”, and “Picture of Nectar”. But having PHISH find this weird pop sensibility on albums such as “Undermine”, “Round Room”, and “Farmhouse” really, well, kinda sucked…do we really need to hear anything past The Story of the Ghost from 1998? (I should get some good flaming from that comment). And don’t get me started on anyone’s solo work (Mike Gordon’s being the best efforts IMO). Anyway, there really is no point to this post I guess except it has given me a selfish reason to bitch about how bad PHISH has gotten, that there are still (and always be) hippies, and venues across the nation in which to give reason to sell grilled cheese sandwiches. Oh, and also…who knew that Trey’s real name is Ernest J.?